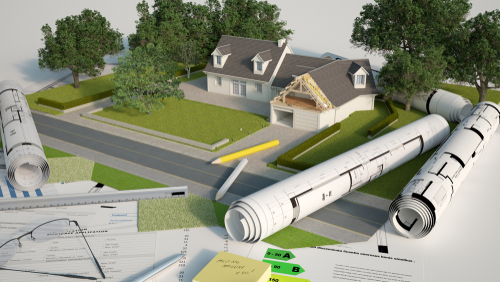 What Are 3D Printed Houses?

3D printing has developed and revolutionized multiple industries. With its unique applications in making jet engine parts to dental implants, it was only a matter of time until 3D printing became a part of the construction industry. 3D printing involves a process in which layer upon layer of material is deposited by a machine which dries up to become a solid object.

3D printed homes are constructed by depositing construction materials and additives on every layer. A nozzle mounted on a steel frame is used to release concrete mixture in the form of paste. This paste is deposited layer upon layer to build a wall ground up.

3D printed homes are relatively new in the construction industry and are still in their development stages. Multiple methods and materials are being experimented with, alongside a whole array of architectural designs. However, it must be noted that this only means that innovation is on the way. Multiple companies and entrepreneurs are entering this industry to transform the future of 3D printed housing.

How Are They Constructed?

The 3D printer works through software design and track-mounted printer, saving both time and costs. The software is used to create, scale and model the house design as per the client. The blueprint of the house becomes code that sets the printer’s movement. The concrete mix is loaded in the printer to start the layering process. The printer creates one layer at a time on top of each other until they are stacked in a set pattern to become a wall. The roof, windows, doors and paint are added later.

What Are The Costs?

What Are The Benefits?

3D printed housing resolves the issue of high labor wages in the construction industry. Up to 80% of labor costs are saved in comparison to conventional housing. The time savings is another great plus when considering savings as it helps mitigate the costs of rent while your house is under construction. Furthermore, the raw materials for the concrete mixture can be prepared on-site which further helps save the costs. Even though the initial cost of a 3D printer for housing is big, the costs are eventually coming down as this practice is commercialized. The prefabrication through 3D printing concrete walls is also relatively much cheaper than conventional building methods.

3D printed housing is much more efficient and less time intensive than conventional methods of construction. The actual time consumed will depend on the specific project, ranging from 4-6 weeks for major projects to even 2-3 days for immediate shelter. This time saving is crucial in the construction industry as it allows for rapid housing development. The benefits of this are immense as it can be the solution to natural disasters or emergencies, where urgent shelter or housing is required.

3D printed houses are constructed utilizing track systems which allow for unlimited flexibility in design and form. This allows for flexibility in the way conventional houses are constructed. Some examples of flexible designs include curved walls, round roofs, etc. 3D printing allows architects and engineers in the construction industry to explore new avenues in the design of buildings, as they finally have the opportunity to try what was previously impossible in real estate. The freedom that comes with 3Dprinted housing allows for incredible innovation.

Conventional methods of construction produce a lot of waste and carbon emissions, harming the environment and also raising costs for the material that goes to waste. 3D printed construction of homes allows for low carbon emissions and minimal on-site waste due to relatively simple and sophisticated methods of construction. Overall, less raw material is consumed in the process which also drives the cost down making it sustainable.

What are the drawbacks?

The raw materials used in conventional methods of construction are not the same as used in 3D printed homes. Due to this, it can be hard to source the right materials and additives for 3D printed construction. This can cause logistics issues and sometimes even scrap the whole project due to unavailability of materials. Furthermore, some 3D printing machines require specific materials which need to be sourced. This also entails a higher cost for some raw materials that are specifically used for 3D printing concrete structures. However, rapid advancements in the industry might be able to solve this issue in a few years but it still is a negative of 3D printed housing.

Unemployment in the Industry

The adoption of 3D printing in the housing sector will cause a negative shift in manpower in the construction industry. As it is one of the most labor-intensive industries, shifting to 3D printed housing solutions will cause the labor to go into unemployment. This creates adverse challenges for the labor as massive unemployment, poverty and homelessness can ensue due to this shift in the construction industry. A single family house built by conventional methods requires almost 20 laborers whereas a 3D printed house requires only 3-4. This can have adverse negative impacts in the long run.

3D printing is still in its early stages of development in the construction industry. As such, there are still numerous limitations to its applications such as restricted construction size, lack of industrial acceptance, and there are several risks involved as well. However, this has also created numerous opportunities for design exploration, complex structures, insulation solutions and immense sustainable applications. As time goes by, 3D printed homes are becoming more and more accessible, affordable and feasible to build at large scales and small.